Rob is an Emmy-nominated and award-winning television and film documentary producer, director and writer.  He has been making documentaries for more than 25 years, including several feature length documentaries and more than 200 hours of network and cable TV programming in a variety of documentary and reality genres.  He graduated from UCLA with a B.A. in Psychology and is currently represented by the Agency for the Performing Arts (APA).

Rob has had many memorable experiences in his documentary career such as being interviewed live on MSNBC in connection with new scientific discoveries related to the assassination of Senator Robert F. Kennedy, hovering in a helicopter inside the crater of Mt. St. Helens, landing on an aircraft carrier in the middle of the Persian Gulf during the Iraq War, and interviewing a wide variety of interesting people such as Nobel Prize winning scientists, best-selling authors, UFC champions, US Armed Forces members in Iraq, Kuwait and Alaska, WWI and WWII veterans, and former CIA and FBI agents, as well as filming in most of America’s 50 states and many foreign countries. In addition, Rob has worked with celebrities including Morgan Freeman, Deepak Chopra, singer-songwriter Jewel, Dan Harris, George C. Scott, Charlton Heston, Dennis Quaid, Kenny Rogers and Gerald McRaney. 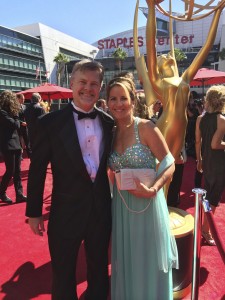 Julie has many years of experience working both behind and in front of the camera.  As a dancer, actor and model she has toured Europe and Asia, performed at the Academy Awards, and was a UCLA Songleader, in addition to appearing in numerous television commercials and music videos. She has collaborated with celebrities such as Jennifer Aniston, Michael Jackson, Paula Abdul, Steve Guttenberg, George Hamilton, Jackie Mason, Alex Trebek, Kristi Yamaguchi, and the band Chicago. Behind the camera, she has worked in development, production, post-production and marketing for several documentaries as well as scripted film and TV projects. Julie graduated from UCLA with a B.A. in Sociology with an emphasis in Psychology.

Rob & Julie live in the Los Angeles area with their two kids and a chihuahua.